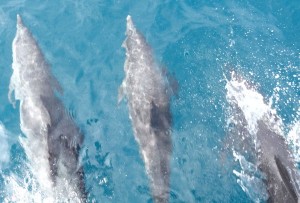 School of Dolphins Enjoying Free Ride; we frequently found lots of dolphins while sailing from Santa Marta to Puerto Velero.

The moonlit and the sound of a remote drum woke me up. After sleeping deeply and sweetly, I felt refreshed and recharged when I opened my eyes. I decided that I should get up and look out in order to see what was going on with our three boats. We had left Santa Marta Marina with two other sailboats from France and sailed/motored to Puerto Velero yesterday. While sailing together, we periodically spoke to each other on the radio. I thought that it was very nice to listen to the French converse on the VHF. John sometimes teases French people by saying that the best French food ever invented, is ‘French Fries’.

Two days ago, we heard that a sailboat was boarded by six men in the Taganga anchorage near Santa Marta, Colombia. It happened about 2:30am, Wednesday, November 25, 2015. The robbers tied the couple and took valuable items including a wedding ring from the woman’s finger. They have two dogs but nobody heard them barking; even if they had barked. The dogs might have sensed the intent of the robbers and remained silent. After finding out about this robbery incident, we felt safer sailing with these two other French boats. 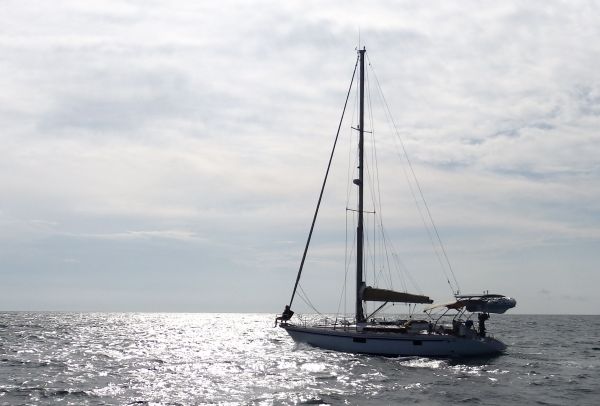 Another sailboat operated by a French woman alone, motoring with us. Due to no wind, we had to motor.

There was another incident about two months ago (September 2015). A Dutch lady was killed on a sailboat at an anchorage in Isla Rosario area near Cartagena. Am I living in the Wild West? Maybe… Sometimes, we are the only boat at an anchorage. If someone invites themselves on our boat and points a gun to our head while we are sleeping, we have no way to protect ourselves. 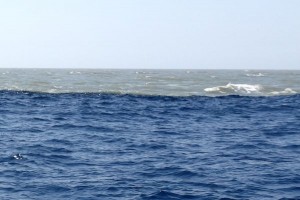 Two Shades of Water Near Barranquilla; The brown water is from Magdalena River, the biggest river in Colombia.

The drum playing music is now gone. It was from far away in town. The sound was pure and soft. It was as pleasant as a lullaby. When I went out on the deck and looked at the town from the boat, it seems there was bone-fire going on. It looks safe here. It might be my paranoia but I am happy to be awake this early and enjoy the quietness in anchorage. Thinking back last three months staying in a Marina in Santa Marta, our life was crazily busy. The city life kept me running in every directions. I lived all my life in cities but it is nice to be back at sea where the fresh breeze flows and the stars enrich my mind.