High Five! Arriving at Bermuda after Four Days at Sea 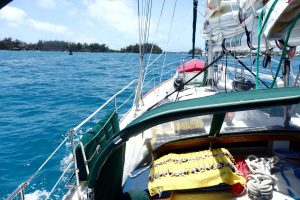 We sailed about 660 miles from Morehead City, North Carolina, USA. Average speed 7 knots. Because of the constant rocking, during this trip, we didn’t sleep very comfortably. The two cats stopped eating their food (except cat treats and tuna water).

Entering the harbor, it appeared that Bermuda looked similar to Curacao (houses on the island) and somewhat like the Bahamas (clear water and sandy bottom). After clearing the Bermudian Customs and Immigration, we anchored at St. George’s.

First thing’s the first; John opened a bottle of icy cold Voodoo IPA beer from the USA (his favorite beer now, might be because of the name). Time to organize things back to their normal place on the boat and make the boat a comfortable living place for a month. Our cats already came out on the deck and peeked around this new place. Cool, it’s another island in the middle of Atlantic Ocean! Wow!!! Boy, am I lucky! Truly? One thing for sure, they get love (not particularly peace) from us, 24×7.

During this trip, we encountered only (crossing my fingers) four maintenance issues on the boat: (1) Port Side Water Tank Fill Leaked (Minor Issue), (2) Outside Shower Sprayer Cracked (Tiny Issue), (3) Generator Outputs only 8V instead of 100V (Big Issue-not being able to make water), and (4) Noise from Engine Propeller Shaft Seal (Adjust it tomorrow when the engine cools down). Turns out that this noise was a HUGE issue, the shaft seal ate itself in 30 hours of motoring. It should have lasted six to eight years, but self-destructed in 30. In order to fix it, we have to order a new part from the US, then have the boat hauled out of the water.

***I just heard on the Bermudian radio, today’s sailing competitions (35th America’s Cup) were postponed to tomorrow due to lack of the wind. 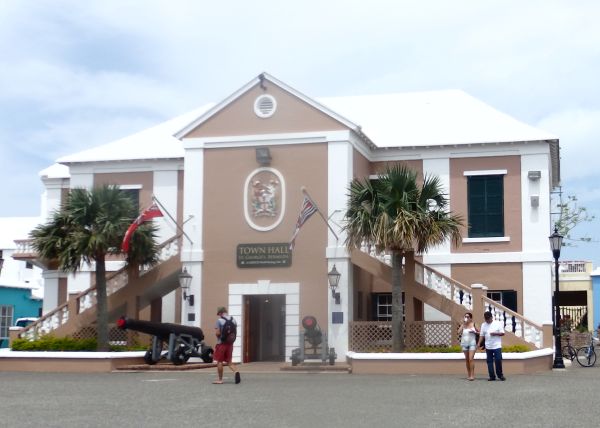 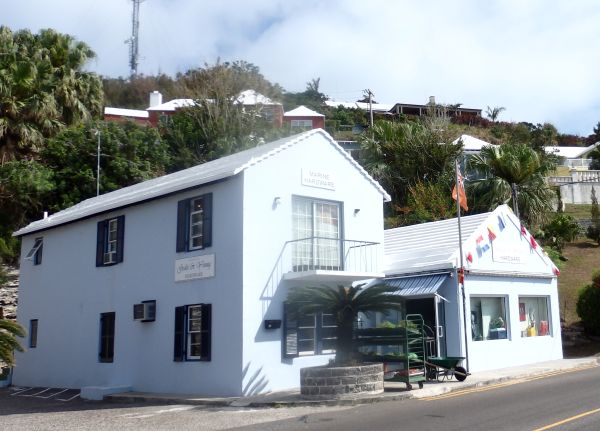 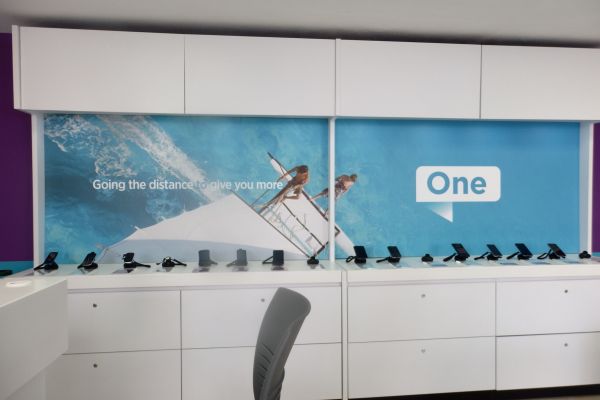 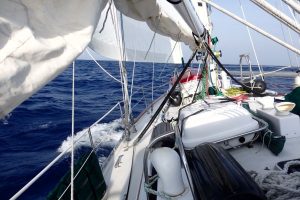 We left the Morehead City Yacht Basin Marina at 1pm with an outgoing tide. For a big sailing trip, we usually take a sea sickness pill the night before the trip. Leaving the Beaufort Inlet, it was rough because of the wind against the tide situation. We have not sailed for the last seven months. We were a little overwhelmed by the high waves. In addition, we found a water leak problem from the Port Side water tank right after getting out the inlet. Some of the spare parts were wet. Boxes of stocked wine got wet and the floor rug got wet. We took the water out and dried as much as we could. John inspected all three water tanks yesterday. They were all good yesterday. Somehow, there is a cut on the hose (turned out it was a screw thru hole) which connects the Port Side water tank to the water fill. For now, we emptied some water out and cleaned the floor. John plans to fix when it is a good time, and he gets some 1 ½” hose. It isn’t a problem for now.

After getting out of the channel, we set the course to Bermuda about 110 degrees (Mostly East). About 670 miles to go. Wind came from the west-southwest steady at 15 to 25 knots. At 3pm, two hours after leaving the marina, I decided to take a nap. Lying down in my cabin, I enjoyed the rocking motion side by side like being in a baby crib. I got up at 10pm and took a night watch which I like. When I got up at 10pm, I went out to cockpit. It was very dark. There was a thin eye brow new moon disappearing to the west. Making a cup of hot coffee, I sat in a cockpit watching the stars. There were not many at first but it slowly showed up more and more. No engine sounds, no traffic sounds: just the sound of waves breaking and wind. We are sailing on a beautiful beam reach (side wind and side wave) getting 7 to 10 knots speed. I am always amazed when the wind lets us go to our destination, Bermuda this time.

We have been lucky. Wind and wave have been steady. We didn’t have to adjust our course nor sails much. Tonight is pitch dark like last night. I am on my watch schedule but it is too dark to see anything at sea. It looks clear in the sky but it is black dark. Only brightness is from our GPS devices and my laptop. Actually, looking at water splashed by the boat passing, I see green luminescent. Even though, I cannot see anything outside, I still go out and look around every 15 minutes, just hoping for the best, such as not hitting a stray container in the ocean. My friend let me watch the movie ‘All Gone’ when it came out first. John refused to see that movie.

We have been eating pre-cooked food: Chili, Fried Rice, Pasta, and Rotisserie Chicken. I also made ‘BLT Sandwich’ with pre-cooked bacon. My friends in Morehead City Yacht Basin, got me into this (BLT Sandwich): Easy and tasty food. There are a variety of snacks on the boat. We stocked up food for two months. We were told everything in Bermuda is expensive.

We have not seen any soul not even a boat until an hour ago. I saw a small fishing boat (54 feet on AIS device). I think the closest land from here (middle of the Atlantic) is about 300 miles away. The fishing boat must be carrying lots of fuel to come here for fishing.

When we left the U.S., we filled three water tanks full (Total: 200 gallons). For last two days, we didn’t use much of it. It has been windy ever since we left the marina. Wind made us sail average at 7.6 knots for two days. We made about 180 miles each day. Today, when we saw the deep ocean, we decided to make water out of it. We turned the engine on and ran the generator. Then, turned the water maker on. Soon after, John found the water maker was not running and leaking water in the engine room floor. By examining the machine, he found a joint between the systems was not tightened completely. Easy fix. Lucky! Everything seems running ok. Then, water maker stopped again. After troubleshooting, John realized the generator is not running 100%. It is generating only 8 volts. This caused the water maker stop running because the water maker runs at 100 volts. He checked the generator one by one; fuses are good. By reading the manual, John thinks the volt regulator might be the problem. He doesn’t have a spare volt regulator. He has to wait until we get to Bermuda. Guess what we are going to do first in Bermuda…

Wind died. Started motor-sailing and then, motoring. According to the forecast, there will not be sufficient wind for a while. John already dropped the main sail and rolled the Jib sail. We will be motoring for a day and half. It has been rough and windy last three days. Good winds though (from right direction and at steady speed). We were lucky to have ‘Fair Winds and Following Seas’, as our friends wished. At sea, I miss people, especially those who wish us well. It let me realize friends are a valuable asset.

Enjoying “Bermuda High!”–just sunny beautiful day and Calm Ocean. Certainly John shouted at me’ “Quick”. There was a baby sperm whale. Looking at it closely, we realized it is dead. Very sad… Not sure what it happened. Better to stop thinking about it. I switched my mind to the ocean water, so blue and clear.

Somehow, when I woke up this morning, I kept thinking about my high school friends. I wondered what happened between us. We were closer than family at that time. We shared our happiness and struggles without any barriers. I haven’t met them last 30+ years. Moving from Korea to the States, people and things in Korea slowly faded away from my life. Am I getting old? I keep thinking more about memories. Maybe being at sea, because I haven’t seen nor heard of people for last three days, am I becoming melancholy?

“We are all so much together, but we are all dying of loneliness.” – Albert Schweitzer