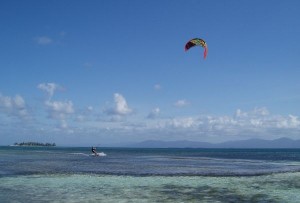 My phone alarm, the sound of a rooster crowing goes off at 8:25am daily! It is about time to listen to the Panama Connection Net (Frequency 8107 USB).

At 8:30am every day, the cruisers in San Blas announce the weather and discuss various matters. The topics vary. One day, someone was looking for a 22mm socket which we loaned him. Today, John asked a question wanting to know where we could buy an ‘Internet Prepaid Refill Card’. A cruiser responded that he has extras we can get from him. We decided to move our boat to a new anchorage where he is anchored. After we got some refill cards from him, he kindly offered us vegetable soup for lunch. How can I be polite when soup is one of my favorite food! He even told us his special sauce recipe. It turned out he is an enthusiastic kite-boarder and has been in Panama for seven years, mostly in San Blas. 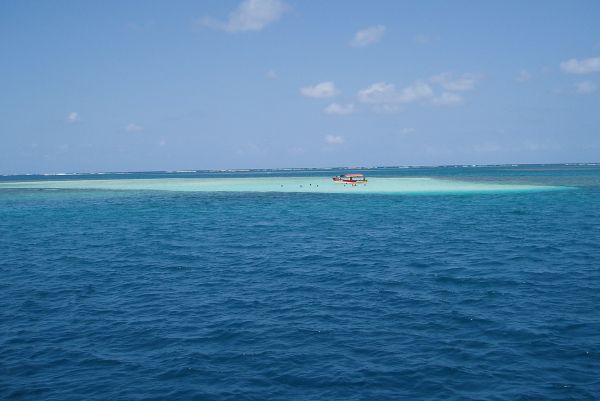 Before we came to San Blas, John dreamed of kite boarding in San Blas. It had not happened because the wind wasn’t enough for him. The guy said that the recent weather forecast is optimistic for kite-boarders. The day will come in a few days. We made ourselves his new neighbor. This anchorage (near Yansaladup) is near the open sea behind a barrier reef with a wide shallow bottom. Only issue is there is no good beach to launch the kite. The long-timers figured out a launching method. As John’s dream was about come to true (kite-boarding), John created his own launching method.

The wind was getting better day by day. By helping John launch and watching people kiteboard, I started to believe that I could do it also. A friend once tried to teach me but I didn’t pursue it because the power of the wind scared me at that time and I also assumed it is younger person’s sport; however, I rarely see younger people kite-boarding. It might be because of $$$. John bought his new kite for US$800. The whole new setup may cost US$2,500 in addition to some lessons which can cost about US$250 for a half day (depending). It takes three to five lessons. I see this sport is more for finesse and precision rather than strength and speed. It looks less dangerous than snowboarding which I gave up trying to learn. I will take lessons, I told John. Never late to learn!!!

PS: John was not a happy camper for a couple of days after his kite got busted while trying to launch it by himself. After he built confidence in launching the kite without a beach, we thought he needed no help from me. That was a mistake. His kite got trapped on a rough stone when he tried to launch it by himself. The disappointment is rather from passing the good wind not kite-boarding. It happens… He decided to have his kite repaired professionally once we arrive in the USA.