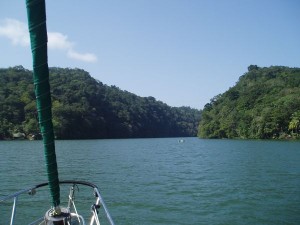 It is known there is a shallow spot at the Rio Dulce entrance between the river and the sea. The shallow spot is about 5.5 feet (1.68 meters) at low tide. Most of the sailors wait for high tide to enter this spot so as not to get stuck on the muddy bottom. Our boat needs 6.5 feet depth (2 meter) to float. To make our boat light, we emptied two water tanks and one fuel tank by consuming them prior. This made ‘Bad Bunny’ float with 6.4 feet depth (1.95 meters) instead of 6.5 feet. We did wait for a night outside of the river and planned to cross this spot during high tide (1.5 feet =0.48 meters higher) around 8am next day. The night before, we hired fishermen (US$25 + US$5 Tip) to guide us the exact entrance, as we had read that if you got stuck it costs US$50 to pull you off. We followed their boat through the shallow spot on the next day during high tide. It could have been done without hiring a fishing boat but it gave us a peace of mind, and it was cheap insurance. When we passed the entrance during hide tide, we saw our depth sounder reading 6.5 feet. We barely made it without touching the bottom. We also saw a big fishing boat waiting for any sailboat stuck at the bottom so they can offer a tow for US$50 to get you off the sand. 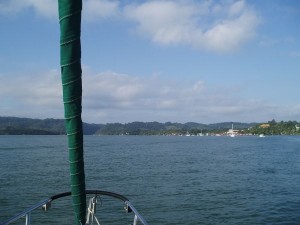 Somewhere in front of us, we need to cross the entrance without getting stuck between the sea and the Rio Dulce river.

The town of Livingston is by the entrance of Rio Dulce (Meaning ‘Freshwater River’ in English) in Guatemala. We hired an agent (Cost: 300 Quetzals = US$40) to clear Customs and Immigration (Cost 1000 Quetzals = about US$133, good for 90 days) in Livingston. The clearance process took about an hour without having any visit from the officials (Customs, Immigration, Police/Navy, Health Department, and Port Captain). Later, we spoke to other people who didn’t hire an agent and did the process by themselves. They had a visit from the officials and enjoyed talking with the officials on their boat, answering a few simple questions. By not hiring an agent, we could have saved US$40 but we preferred to let the agent take care of it “as we were smuggling a Giraffe, a small Walrus, drugs, guns, money, nuclear material, biological weapons, terrorists, illegal aliens, porno movies, sex slaves, booze, Ebola, and flesh eating bacteria. By paying $40 to an agent, no one investigated our illegal smuggling operation and now John wants to import more things to Guatemala. Specifically next time he wants to bring in carnivorous human eating space aliens and see if anyone notices.” (John’s Phrase)

A guide boat departing from us after crossing the shallow spot in Livingston, Guatemala

Staying overnight at the anchorage of Livingston, I enjoyed watching the fishermen. They go out at night and come back very early in the morning. By 6am, there are many small boats waiting to buy fish directly from the fishing boats. In the sky, there were countless hungry birds ready for breakfast from the fishing boats. I asked a local if I can buy fish from them. He told me that they are shrimping not fishing boats. When I went to the pier around 9am, all the fishermen were already gone. I saw a lady who was transporting shrimp with a three wheeled bicycle, so I bought all of her shrimp. (20 Quetzals/pound = US$3) The sizes were all mixed large and small together. It couldn’t be fresher. I plan on buying a lot more when before we leave Livingston, Guatemala on our way to Key West, Florida. 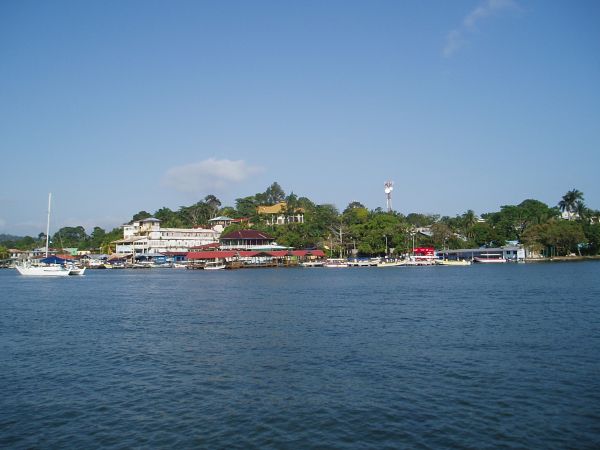 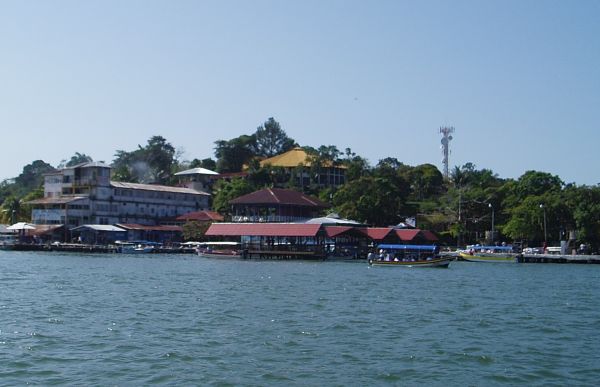 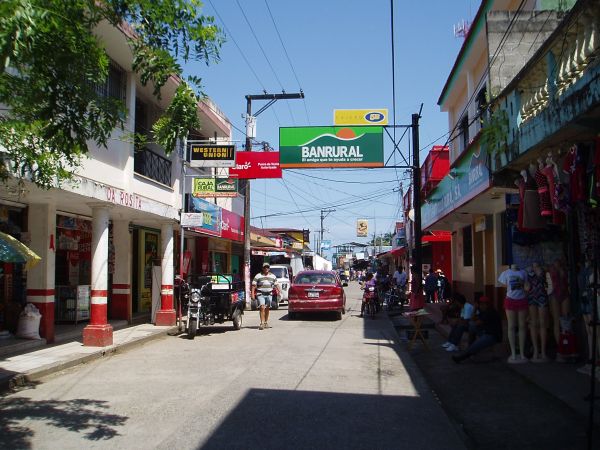 ATM (5B) and Bank (Banrural) Signs on the Main Street in Livingston, Guatemala