I am officially retired (early) since June 2014 from a job as a Computer Programmer, to pursue my real dream ‘Living close to nature and loving all I can.’

The Sailing Yacht ‘Bad Bunny’, a Valiant 47 built in 1992! It has been my new home since June 21, 2014 after driving 14 hours from Fort Lauderdale, Florida to Morehead City, North Carolina where ‘Bad Bunny’ was. I brought my cat ‘Sesame’ with me joining the other two cats ‘Enemy’ and ‘Swat’. There are three cats and two people (John and myself) on board.

Because of a limited space, I brought my clothes, shoes, bags, toiletries etc., as little as I can. I think all of my personal stuff would fit in a 50 pound travel bag. In addition, I brought my books/documents, SCUBA dive gear, a folding bike, a keyboard piano, an oriental calligraphy practice set, a yoga mat, a laptop and a camera. Organizing them efficiently on the boat is one thing but finding one is a tedious task sometimes. My conclusion at this moment, keep it seriously simple (KISS).

After my arrival on ‘Bad Bunny’, we experienced the eye of the first hurricane of the season ‘Arthur’ passing just above us on July 3rd, 2014. It was a long night worrying about (?) ‘Unknowns’ but thankfully, no damage on the boat or injuries to us and the cats.

Five days ago (August 1st, 2014), we hauled out ‘Bad Bunny’ in rain after we motored her from Morehead City Yacht Basin to Bock Marine in Beaufort North Carolina for a major refit for ‘Crossing the Panama Canal and Sailing South Pacific’ aiming for a circumnavigation. On August 2nd, both John and I took the ‘Ham Radio General Class License Exam: Next Level of Technical Class License Exam’ and we passed the exam! Main purpose of getting a ‘Ham General License’ is to get weather reports at sea through a Ham Radio.

It has been raining for last four days ever since we hauled out ‘Bad Bunny’ at Bock Marine. There is a lot of work to be done at dry dock. This includes ‘Sand and Paint Bottom of the Boat’, ‘Remove Mast Fittings from Interior’, ‘Remove Riggings’, and ‘Cut all Electrical Wires from Mast’, ‘Remove and Paint Mast and Boom’, ‘Reassemble Mast and Electrical Wires’ and ‘New Rigging’. Some of the jobs will be done by professionals but most of the jobs will be done by us by learning and doing it. Knowing John, he has tendency to do over. It is more work but it made me trust ‘Bad Bunny’.

The other day, John and I had a discussion on ‘Proper Boat Size’ since we have been busy with all the preparation including the repair of sails and other sewing projects. Even though I minimized my belongings, there are some free spaces on the boat that will be mostly used for storing food, parts, and tools for crossing ocean. I wondered if getting a smaller boat would be a better choice to have more free time. The less we have the less maintenance would be required! How less can we live without? Would it be good enough with ‘Camping on the Water’ lifestyle? What can we give up: water maker, generator, A/C, engine, laundry machine, heads (toilets), or stove, if we have to throw one? With all the talk, we concluded that what we have is what it is. We need to make us and ‘Bad Bunny’ evolve into a smooth machine. It is a job to balance our lives based on what we have: space and storage items, work and fun, and living full with less but still in reasonable comfort. Right now though, it is time for work, not 9 to 5 but on our own schedule. I became happy with the reality because the more work done on land the less pain at sea it would be! I am ready to roll up my sleeves for the day! 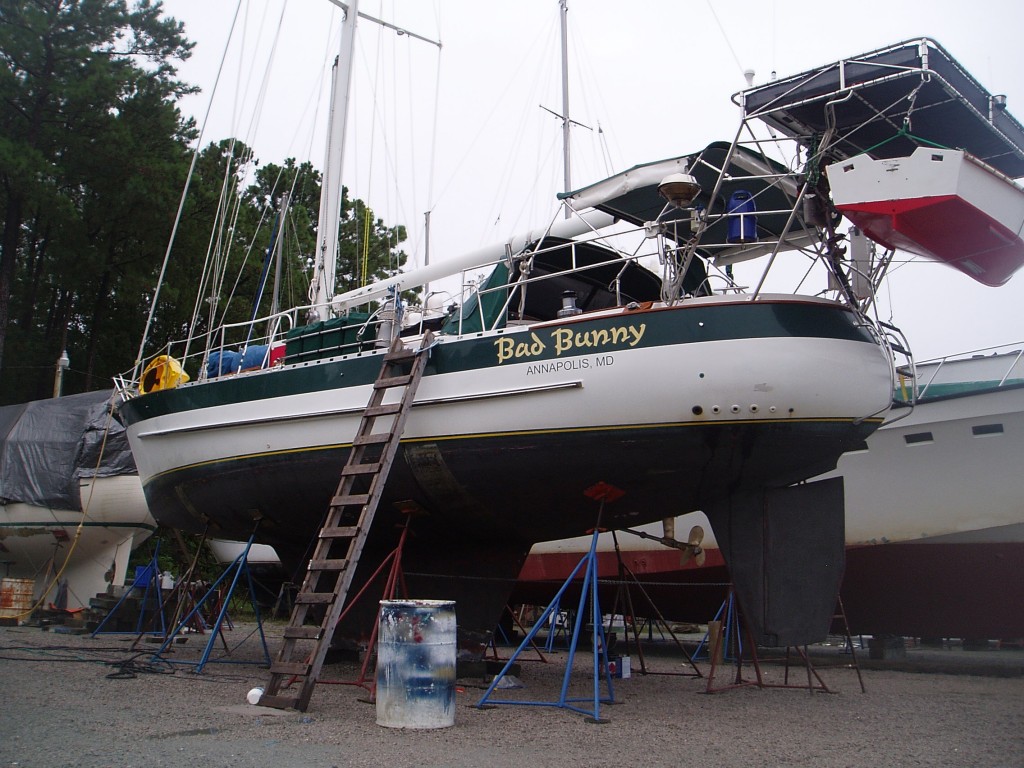