Sailing from Curacao to Cabo de la Vela in Colombia 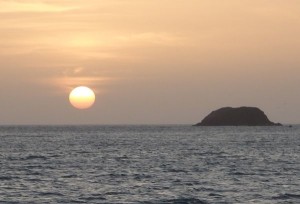 Day 1 (August 25, 2015): Rather in rush, we left Curacao at about 10 AM. The wind ranged from 15 to 20 knots throughout the day. Days earlier, there was a hurricane ‘Danny’ (later changed to tropical storm) in Atlantic which affected the trades weakening them and giving us a great weather window for Colombia. We took it! We heard this sailing route is one of the five most difficult sailing routes! During my watch schedule, I saw hundreds of dolphins playing around our boat following the waves. They stayed with us for more than an hour. 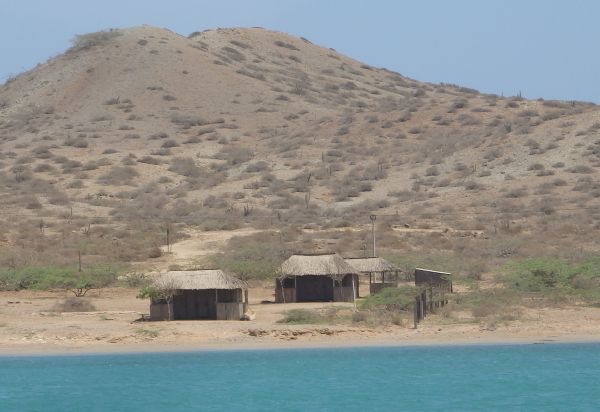 Night 1 (August 25, 2015): Wind changed to 8 to 15 knots. It was too light. Our sail didn’t work well with light downwind, and the main was banging and slating. We hardly slept the night. As the Sun disappeared, the moon started shining on the sea. It is one of my favorite moments sailing at night when moonlit brightens the sea. Later, the wind, the current, and wave directions seemed confused and didn’t work well together. It caused the sails to collapse so we decided to put the jib pole out and sailed wing-on-wing with the main sail. This worked well until we passed the east of Aruba. From there, seas got more confused. Sails made banging sounds having not enough wind for downwind sailing. We dropped the main sail and just used the jib sail on the jib pole. 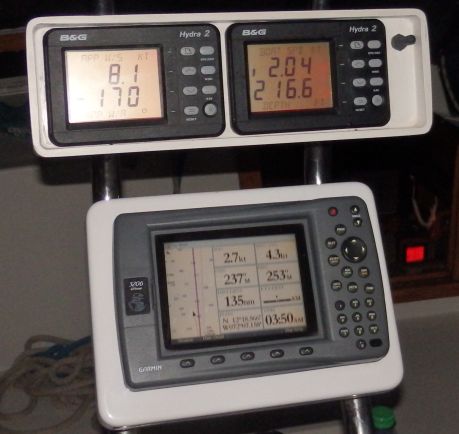 Day 2 (August 26, 2015): New day, sun is up. Wind speed was 8-15 knots and seas 1-2 feet. Jib pole does work for light downwind sailing but we are going very slowly now. Who said that it’s all about journey? We’d better enjoying slow sailing for now. It is moving 3-4 nautical miles per hour. It is peaceful watching our cats sleeping so deep as if they were drugged. One thing we heard a lot about sailing close to Venezuelan land, was the safety and security. It was recommended to sail away from the Venezuela. John asked me to wake him up if any boat approaching toward us near Venezuela. Fortunately, we are getting closer to Colombian water without any security issue. 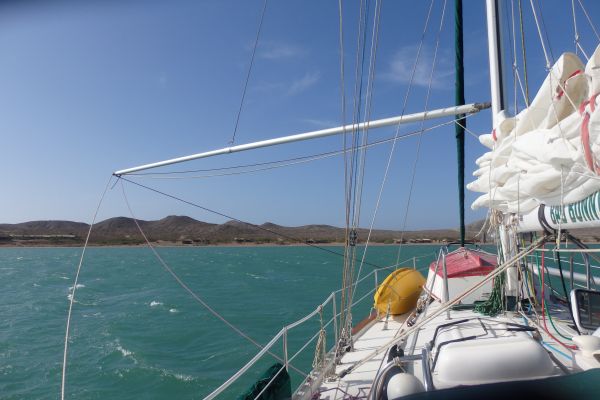 Jib Pole Out on Bad Bunny

Night 2 (August 26, 2015): Wind died to 5-10 knots. We are making 1.5 to 3 knots. This was unexpected. Using a jib pole worked though. This is a route to Panama Canal from the Caribbean Island, there are lots of tankers and cargo ships in this area. We monitored using the AIS system but out of blue, our AIS system died. We monitored with our naked eyes without depending an AIS system. Our boat is moving too slow… Sailing speed 2 knots with 8 knots wind speed! Eventually, we arrived at Cabo de la Vela in Colombia around 6 AM on August 27, 2015. Lots of small fishing boats were busy fishing. We carefully navigated not passing over their plastic bottle buoys and anchored our boat in a sheltered of the mainland in Cabo de la Vela anchorage. This place looks quite laid back, some small village houses with thatched roofs. We didn’t go to the land and just went to sleep to get some rest for next sailing to Santa Marta. Five hours after we went to sleep, the wind started blowing at 25 knots which was unpredicted. We can only see what tomorrow brings!!!