Sailing from Suriname to Trinidad 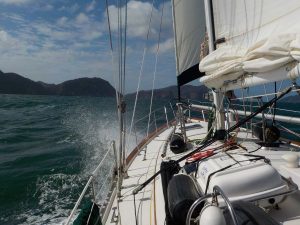 (February 13 – 16, 2018) From Suriname (South America) to Chaguaramas in Trinidad, we sailed a total of 565 miles in 77 hours. On the second day, even including the slowdown for the autopilot repair, we still made our fastest daily trip, 184 miles.

Motoring out of the Suriname River, we scheduled our departure time with the tides. Not wanting an incoming current slowing us, we left the Waterland Marina at 6:50am, about two hours after Paramaribo high tide. It might have been better if we left one or 1.5 hours after the Paramaribo high tide, but we waited for daybreak. On that day, Paramaribo HIGH tide was 4:44am and LOW tide was 11:21am. Suriname River LOW tide (near the Pilot Boarding Place at sea), was 9:39am. As we motored about 38 miles out, we averaged 7.5 knots for five hours. By this time, the current had started to change. We were about at the right spot to raise the sails to sail to Chaguaramas in Trinidad.

We were able to see Venezuela (far right under the cloud-not so clear on the picture) entering the Chaguarmas Bay in Trinidad, The West Indies. The closest distance between two countries is seven miles.

After reading recent Venezuelan and security related episodes; I was against sailing to Trinidad. John was determined to have our boat repaired in Chaguaramas because Trinidad is THE main yacht repair center in the Caribbean. We have a lot to repair after sailing about 8,000 miles for 9 months (May 2017 to January 2018) in the Atlantic Islands from the USA: Bermuda, the Azores, Madeira Group, the Canary Islands, Cabo Verde, French Guiana, and Suriname.

Wind was predicted from the Northeast at 10 to 20 knots. We were very comfortable sailing on the first day making 7-9 knots with the follow current pushing us along. Later, we lowered the main sail to the first reef. The following day the wind speed became 20 to 30 knots with frequent squalls. During this time, our auto-pilot quit working. We lowered the main sail to the second reef and rolled in some of the jib sail. We heaved to, and started to troubleshoot. Heaving to, made the boat slowly move Southwest since the wind was coming from Northeast. We resumed our course and I decided to hand-steer. With sails on, I was able to steer in the right direction making 7 to 10 knots.

Less than two months ago, when we had the auto-pilot problem, we used the last (Only One) spare part (Compass Module). By troubleshooting the electrical wires and etc., it appeared the same part stopped working again. Not having the second spare part, we felt we were doomed: hand-steering the rest of the trip, for two plus days in squally weather. Giving up troubleshooting and being ready for hand-steering, John pushed the auto-pilot clutch engagement. At that time, we heard a sound of a metal plate falling off. “Did you hear that?” John asked. “Yes! That might be a good sign because we might be able to fix it.”

It was raining. We emptied a cockpit locker to crawl down under and behind the cockpit space to check the sound. When John came out from the tiny storage hole, he brought broken screws. The plate was supposed to be held by four screws. However, it was held by one screw and another half broken one. The other two were gone. John found two extra screw of the same size and attached the plate. It was not possible to remove the half broken screw. Once the plate was attached, we tested the autopilot. It started working. “It will let us go to Trinidad for now.” John said.

The third day, wind dropped to 15 to 20 knots, no more squalls. We sailed comfortably. Nights were pitch-dark as Sun and Moon rose and set about the same time. Our charts have not been updated. Knowing that there was lots of new petroleum development in this area, we frequently checked the area. We found out that the oil rigging platforms show on AIS display and are VERY well illuminated. The sea was a bit rough, about 6 to 10 feet. We made sure to sail about 100 plus miles away from the Venezuelan coast.

Trinidad is an English speaking country. I was feeling secure. As we approached the Trinidad coast we started seeing lots of freighters on our AIS display and listened to talks in English on the VHF channel 16. Sailing in the Atlantic Islands, we mostly listened to Portuguese, Spanish, French, and Dutch speaking only. I felt like I was coming home. The Caribbean is almost like the USA’s backyard.

PS: After arriving in Trinidad, John questioned the first auto-pilot problem which we had two months ago. It turned out the old compass module is working fine. It must have been the clutch plate problem also. We will soon have two spare compass modules: The working old one and the new one delivered to a friend’s house in Florida. 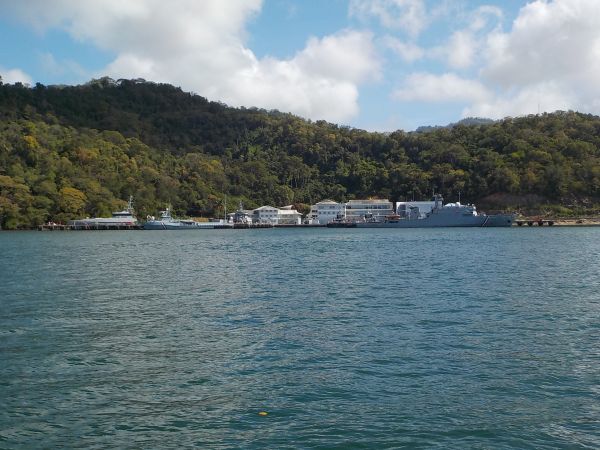 The Customs and Immigration Office is between the lighthouse (left) and the blue roof building (right) in Chaguaramas, Trinidad, The West Indies 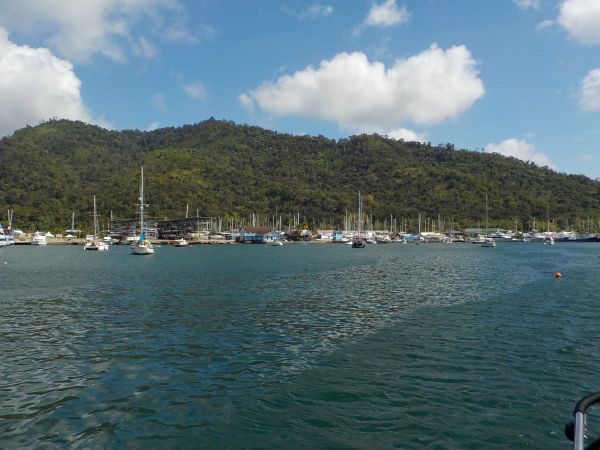 Many Boatyards on the shore in Chaguarmas, Trinidad, The West Indies 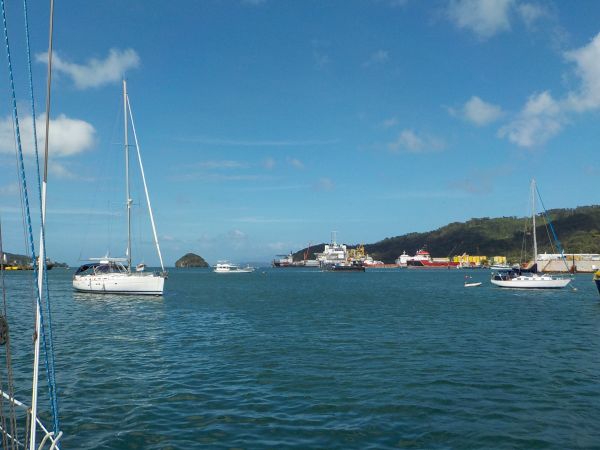