The Scots in Puerto Escoses in San Blas in 17th Century? 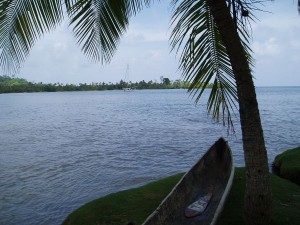 Entering the ‘Puerto Escoses’ (Meaning ‘Scottish Port’ in Spanish) anchorage needs careful attention. We found charts are sometimes not exact. On a guide book, it mentioned a small rock (3 feet high) sticking out on the water. We definitely didn’t want to hit this rock. ‘I see the rock. It is over there’, John shouted. We are relieved but we still had to watch the bottom approaching the anchorage. What if the boat hits a rock… Is it going to sink? Most likely not but how would we fix the problem, if any? We don’t need any of these ifs… No one lives in this area. We saw some empty huts on land. A couple of hours later, a fishing boat came to us. The man introduced himself that he is from another island because he owns some land in this area. After talking, he said he will be back later and went toward the forest land. I asked John ‘what was his name?’ It sounded like his name is ‘Juan Wayne’, John said. I waited for this boat late afternoon but I gave up. Before it gets dark, someone shouted outside so I went out on the deck. He sent me a signal from far away that he is not stopping by us because he has to go to his island. His boat was full with crops such as coconuts and green bananas/plantains. It’s already dark. There is no single light. The island, he is going to is about 10 miles away. He was going out the roaring sea with his small dugout wooden boat heading to his home in another island… 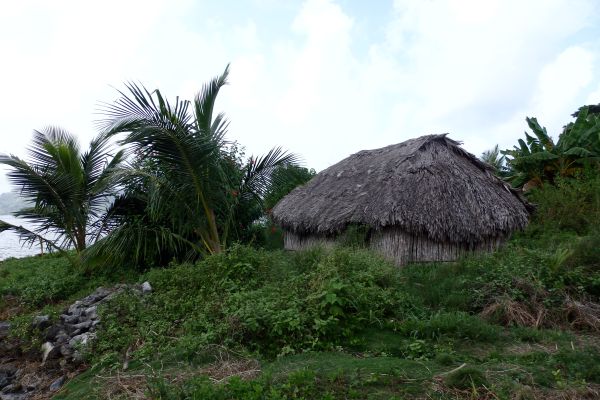 Next day, we went to the shore to find the ruins of the Fort Saint Andrew on land. This was built by the Scots in the late 17th and the beginning of 18th century. The Scots gave up Fort Andrew in 1702 after having bad times. Approximately, 2000 people died by starvation and disease out of 3000 people. Walking in the forest searching for the Fort Andrew, I worried about seeing snakes or something. I also noticed John was clapping his hands when approaching fallen trees. The land is covered with green bushes and trees. “John, I don’t think it is worth to find the Fort Andrew, let’s go back to the boat!”