↓ Skip to Main Content
Home › Atlantic Islands › Touristic Faial Island in the Azores: Clear the EU Immigration/Customs and Raft up at Horta Marina

Touristic Faial Island in the Azores: Clear the EU Immigration/Customs and Raft up at Horta Marina 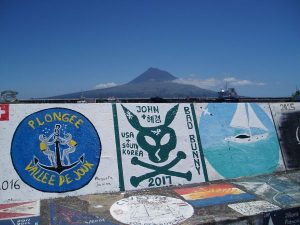 Bad Bunny was in Horta, Faial Island in the Azores.

We officially cleared immigration and customs in Horta Marina in Faial Island. The process was simple and easy. To check-in at the marina, we provided the boat insurance policy along with other documents. The 90 day stay in European Union counts starting as we cleared customs by the officials here.

In Faial Island, there are many tourists. Some camp in tents at a park by the beach or other camp sites on the island. Others travel with backpacks and the majority stay in the hotels. In the first weekend in August in Faial Island, there is a well-known annual event called ‘Semana do Mar (Sea Week)’. This festival goes almost for two weeks but officially from the First Sunday to the Second Sunday in August. Different kinds of concerts start around 11 pm every night. One of the events during this festival, is giving the blue Hydrangea flower and a local produce gift to each yachtsman. The mayor of the city stopped by the yachts and handed the flower and a gift bag with a jar of honey, a box of lemongrass tea and a box of peppermint tea, and a loaf of cheese. He also shook my hand and spoke in Portuguese (I just smiled) then, later in English. 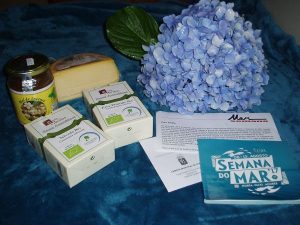 It seemed to me that the majority of the boats in the marina, are from France or the Netherlands. When it is crowded in the marina, it is common to raft up. There were no slips available to us. We are moored to the quay in the marina. We have two other sailboats rafted up next to us. A boat from France (with 8 people) and another from Netherlands (with 5 people). In order to access the land, they have to walk on our boat. Some are careful and others careless. When we are sleeping at night, some came from the party at 3 am walking on our boat to go to their boat. Coming from the USA, it is a little difficult to digest the rafting up. 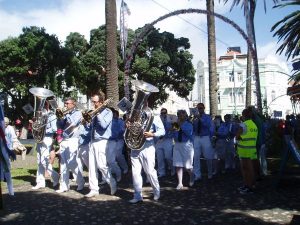 One day, our neighboring French boat rushed out early in the morning in order to help (tow) another French sailboat at sea. I later found out, the guy from the other sailboat experienced pain in his chest at sea. They were able to communicate with the authorities and he was helicopter lifted from a nearby freighter to a hospital in the Azores, leaving his wife alone on their boat with a broken engine. It was six days ago. During this time, his wife sailed alone and was contacted/confirmed by the French Coast Guard every four hours via their satellite phone. After he was examined and released from the hospital (no heart attack), he had to go to his sailboat and his wife. He asked our neighboring French boat for help. They towed his boat to the marina. All worked out fine. 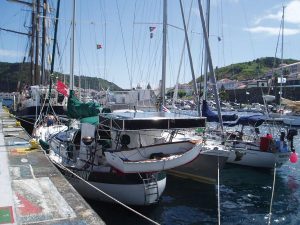 Our neighboring French boat (with Eight People) left yesterday, sailing back to the France. They were very nice to help the other sailor. I liked them but we were glad that we no longer have eight people walking on our boat at night. We now have American boat next to us. He is alone until his wife flies from the States. However, not long after, a new arrival French boat rafted to our neighboring boat. There are six people on that boat. John politely asked them to walk on our boat with concern, no shoes, do not step on the varnish, and don’t stand on the lifelines. (Yes, the previous French boat did all of this.) Communications seem to be working. We are getting used to this new boating culture. Rafting up in a marina is common in Europe, I was told. John swore he won’t visit Europe with his sailboat because he doesn’t like rafting up. 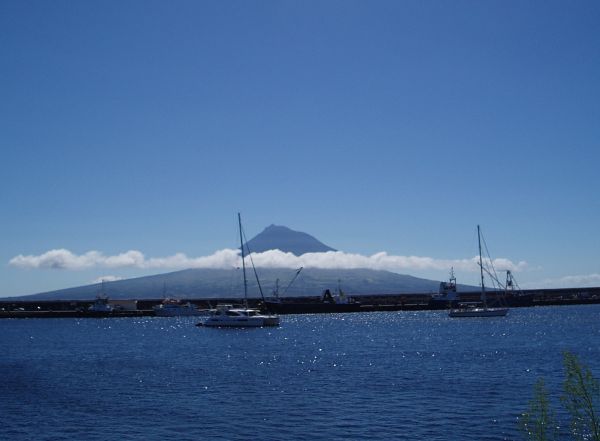 Pico Island View (Peak 7,700 feet = 2,351 meters) from Faial Island, Azores. We planned to hike to the top but cancelled it because John had back problems. 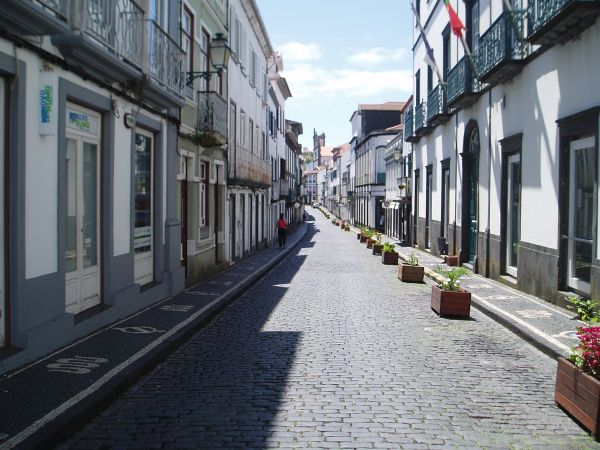 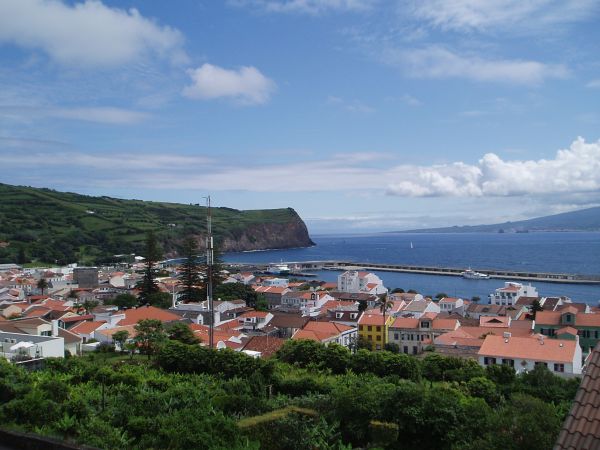 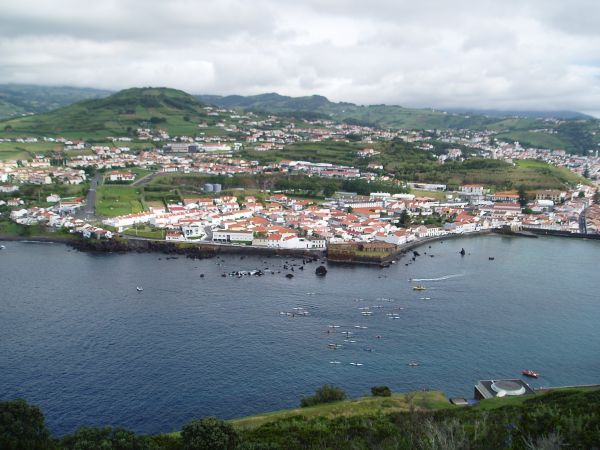 Kayak Race During the Sea Week in 2017, Faial Island, Azores 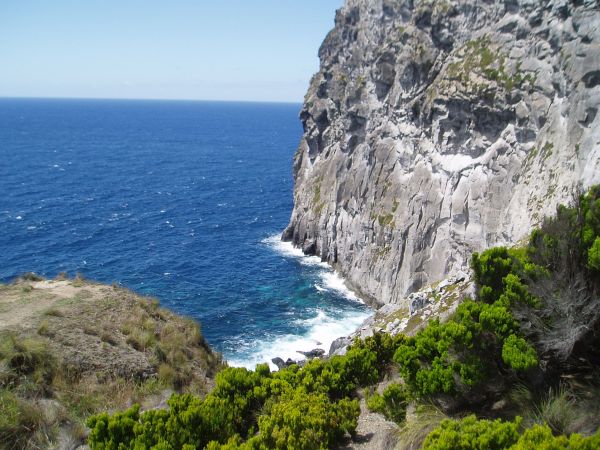 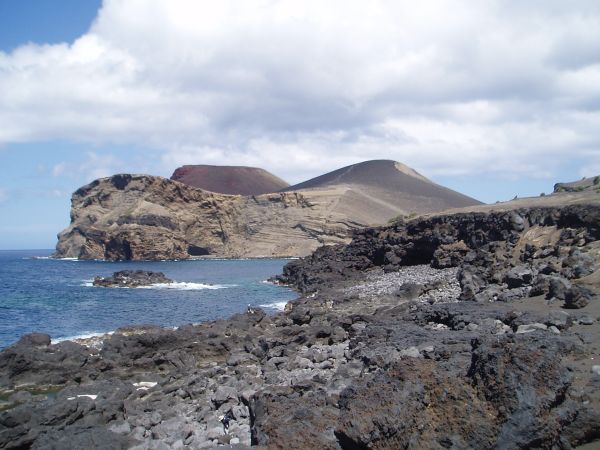 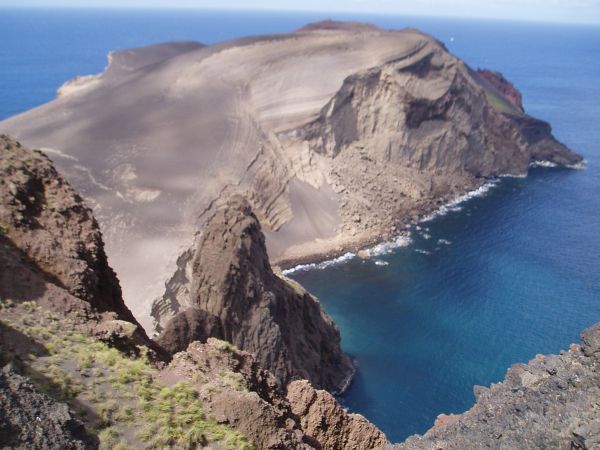 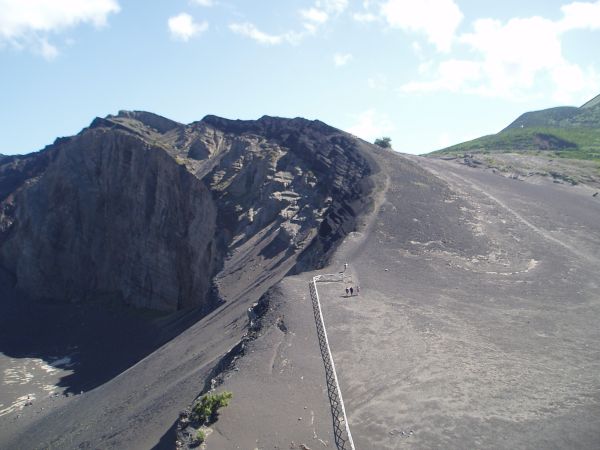 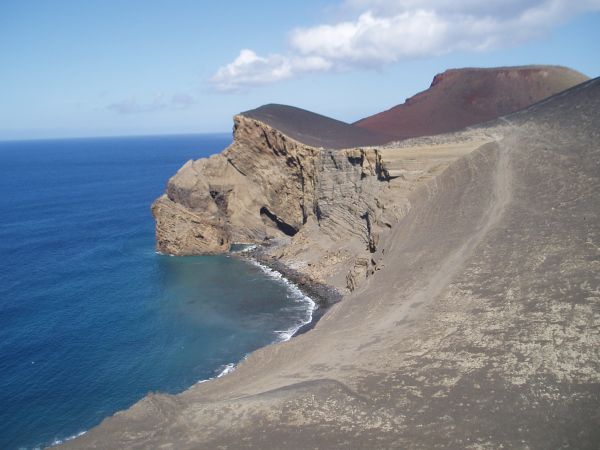 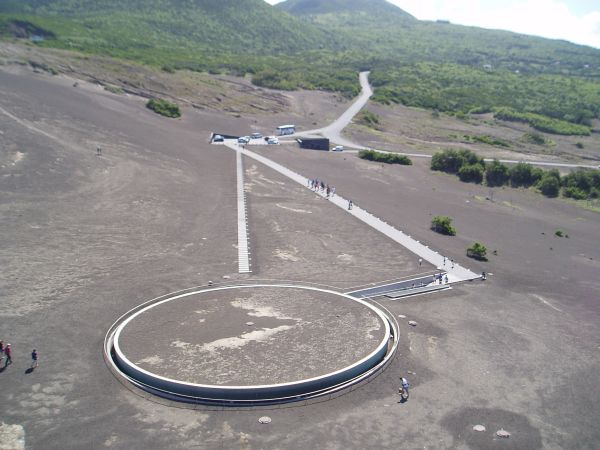 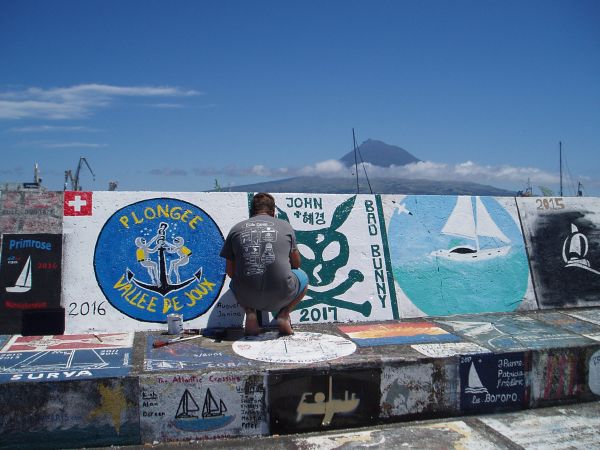 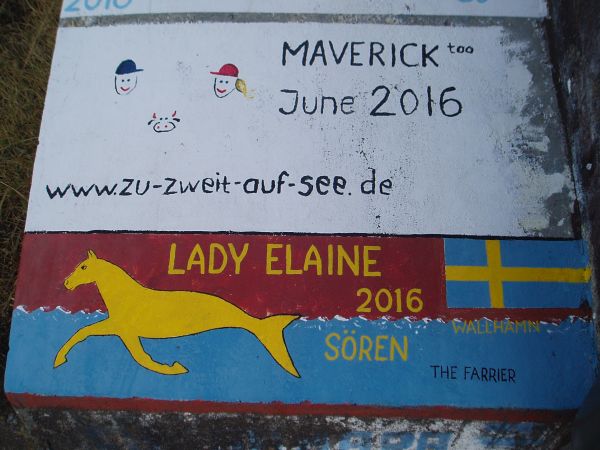 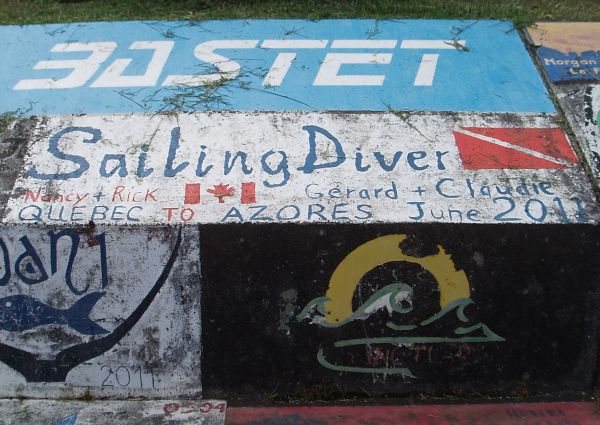 We met Rick and Nancy from ‘S/V Sailing Diver’ (Canada) in September 2015 in Colombia. 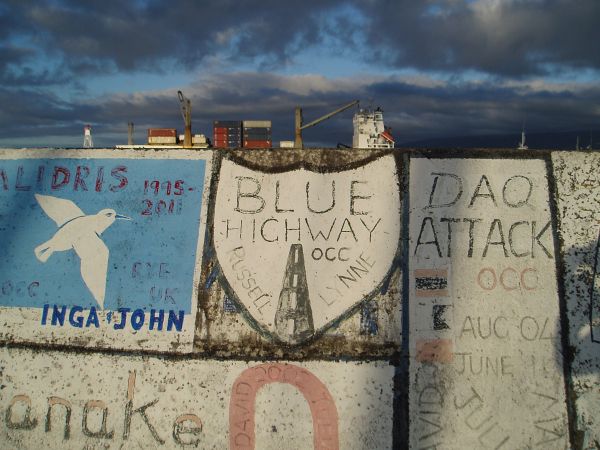 We met Russell and Lynne from ‘S/V Blue Highway’ (Naples in Florida) in San Blas, Panama in January 2016. 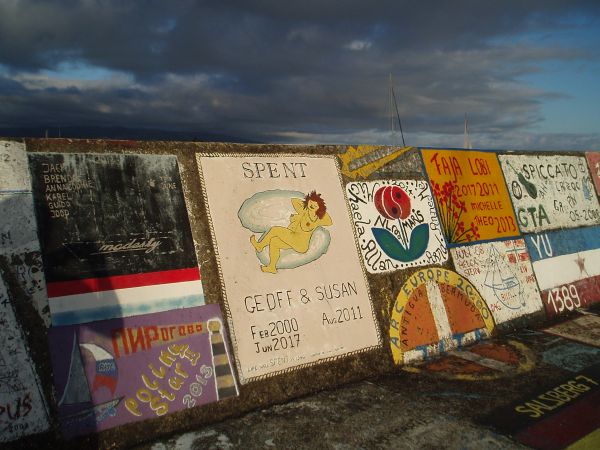 We met Geoff & Susan from S/V Spent (England) in September 2015 in Colombia.

We met Rob and Hunter from ‘S/V Xcape’ (Fort Lauderdale) in Bermuda in June 2017.