Sailing to Bonaire from Ponce, Third Times the Charm! Three Water Related Problems in a Row

A while ago, when we left the states, our original plan was to visit Haiti, Jamaica, and San Blas Islands before we cross the Panama Canal in spring 2016. Later, we found about ‘Heavy Lightning Activities’ in San Blas Islands in Panama. Changing our plan, we decided to sail from Puerto Rico to Bonaire (South), not to Haiti (West). I was disappointed about not visiting Haiti and Jamaica. We will be spending the summer in the Dutch Islands; Bonaire, Curacao, and Aruba, and in Colombia which are all south of the hurricane zone.

We stayed in Puerto Rico way longer than we thought. The weather window frame looked good for sailing from Puerto Rico to Bonaire on Good Friday. We were excited but one day before sailing, we found my cat ‘Sesame’ has an infection. Instead of taking her to a veterinarian in Ponce delaying our trip, we searched for ‘wound treatment’ on the internet and followed the instruction. We also received an email advice from our veterinarian friend. All went well with John’s lifetime cat loving experiences! Later, while sailing, we had to make a licking shield out of coke bottle and water bottle to stop my cat from licking her wound. Another three days until we could get her to see a veterinarian… While sailing looking at her, I felt pain. 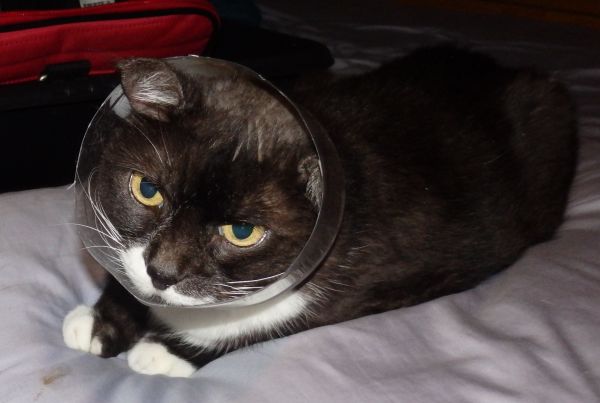 While sailing from Puerto Rico to Bonaire, we had to make a licking shield (Version 1) using a coke bottle for my cat ‘Sesame’. 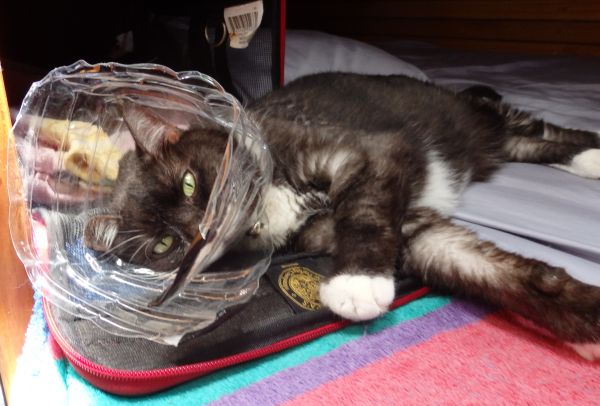 I got it now. “It’s a boat.” As John used to say, a cruising boat is like a car, a house, and a toolshed all combined together going somewhere in salt water. One way or another, ALL boats have problems periodically. It is a part of the enjoyment overcoming hardship and accomplishing tasks while seeing picturesque nature, meeting beautiful people, and breathing the FREEDOM. 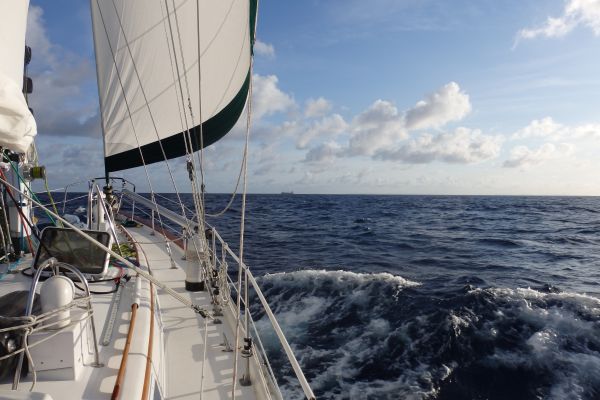 In the middle of the night before we left for Bonaire, I heard the water pump running periodically. The pump pressurizes the water from one tank to the faucets and shower so that we can use water. Waking up and searching for the cause, we found hose had a tiny slit. Luckily, the hose was long enough to cut the slit area and reassemble it. Problem fixed and we went bed. An hour later, it was leaking again. Both of us had to wake up twice at night. This is the third time it happened. When it happened first time about three months ago, we concluded the hose was defective. We forgot to order a new hose and replace it in Puerto Rico. Now, we replaced with another type of hose which was shorter and had to be routed in a different way. The problem has been temporarily fixed. We hardly slept. We were tired but the weather says we need to sail to Bonaire now. 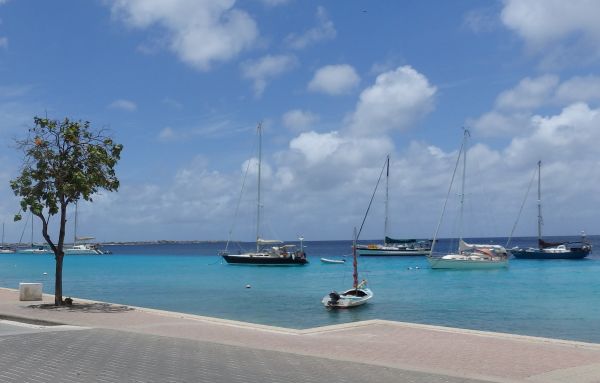 Bad Bunny on a Mooring at Kralendijk, Bonaire

Two days prior, we had another type of water leaking problem. We have a 17 year old laundry machine on our boat. When it runs, we think it leaks water from somewhere. This is a small laundry machine fitted perfectly under my bunk in my cabin. This tiny laundry machine (it needs to pass 17” door width) is available only in the U.K. Since the shipping cost and delivery time is not suitable to us, we decided to order from Bonaire. We are hoping to order a new one and have it shipped to Bonaire. No problem washing laundry by hand for now!

After departing from Ponce, I went to down to check our cats and found puddles of salt water running on the floor on our boat! A high pressurized deck water system got busted and it pumped salt water on the beautiful teak and holly floor. Three times in a row, we had a water related problems. We shut off the anchor wash down system for now. While sailing with 20-25 knots wind, draining the salt water and cleaning the floor made us sick. In addition, the ocean was rough with 6-9 feet high waves. I felt my whole body pieces were shivering with motion sickness. After taking stronger medication, I managed to fall asleep. I just kept thinking an excerpt from the book ‘Letters from a Stoic by Seneca’. On his letter ‘LXXVIII’, he wrote “… he (*doctor) will recommend that you take a trip by sea and derive some stimulation for the internal organs from the gentle motion of the boat; …” When I woke up, I heard John coughing hard. All these problems got him sick! It’s time for him to get some rest and catch his sleep.

Fish stories… Right after taking off Ponce, John shouted ‘Fish on!’ On no… It was his watch duty and I was in my cabin to get some sleep. Catching fish means cleaning it on the deck (John’s Job) and nicely pack in the freeze. (My job) If sea is calm, it’s good. Not now… When he reeled in, I was relieved. It was a barracuda. He unhooked the fish and threw back in the ocean. A day later, he caught a huge fish but lost a rod and reel instead of catching it. The reel was rigged with 60 pound test line, but the rod snapped off at the base and both the rod and reel fell into the ocean. Since John lost one of his fishing rods/reels, he plans to buy a bigger one that can handle up to 300 pound test.

The sailing distance from Ponce to Bonaire is about 400 nautical miles. We estimated 60 to 70 hours of sailing and planned to arrive in Bonaire early in the morning, not when it’s dark, so as not to break or bang our boat into something. Because wind was stronger, despite of our efforts of adjusting our speed, we arrived in Bonaire in the middle of the night. The Moon was bright (almost full moon) but the water was dark. I tried to spot a tiny mooring while John drove the boat slowly back and force. It was difficult to find a mooring. We were very tired! From far away, we saw a flashlight signaling us. We went close to the flashlight and found another sailboat (Name: Gabber). They flashed a mooring in front of their boat. All worked great with their help! We thanked them in the morning. They are from the Netherlands have been staying in Bonaire for three months. Since this is the Dutch island, there are lots of people from the Netherlands.

Wow… I love it here. I told John when he woke up. Bonaire! It means good air as ‘Bon Dia’ means good day. Water is so clear and everything looks so clean. I can see colorful fish right down under our boat which about one minute swimming distance to shore.

Time to clear Customs and Immigrations in Bonaire! We took a dinghy to the shore and enjoyed the fresh air walking to the office. The people in the office were the best authority we’ve ever met so far. Even better, there was no clearing cost at all. When they offered us any help, we asked a veterinarian location. An officer called a local veterinarian and let us talk to him on the phone. The veterinarian asked a bunch of questions, gave us free consultation, and told us it is not necessary to take my cat to his office. After hanging up the phone, John told the officer, we want to move to Bonaire and asked what it requires to be a resident in Bonaire… The officer jokingly told us ‘No requirement but behaving…’ 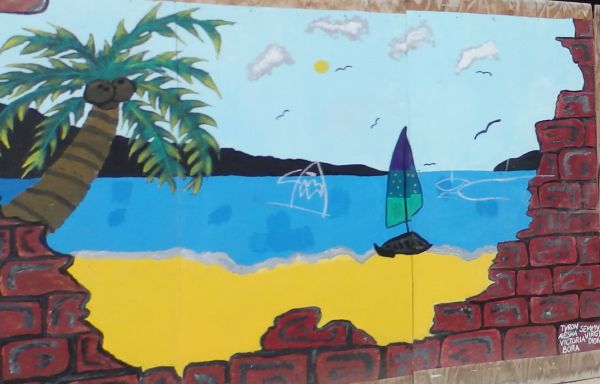