At Tintipan anchorage, I found out about the world’s most crowded island. Let’s say that my walking step size is one meter. The best way to describe the size of this island is that the length is 200 steps and the width is 60 steps. Multiplying the length (200 meters) and the width (60 meters), the total area of this island is 12,000 square meters. There are over 1,200 people living on this island. Basically, one person’s living space is about the size of three steps by three steps. It is not far from Cartagena, less than 50 nautical miles. 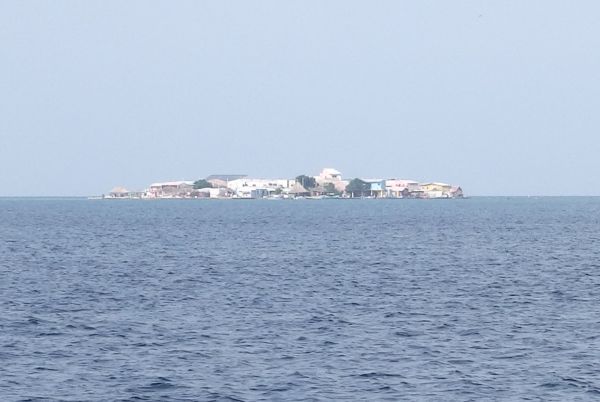 After leaving Cartagena, we arrived at the anchorage in Tintipan Island (sounds like Peterpan Island though). There are many beautiful islands in this area, San Bernardo Archipelago, Colombia: some small and some big islands. We had to watch the bottom while going close to the Tintipan Island anchorage so both the reef and the boat don’t damage each other. After anchoring, John went to snorkel to check the anchor settlement. He came up and said ‘the water is beautiful and the visibility can be 80 feet but there are no fish here’. We decided not to visit the island and just rest for our next overnight sailing to Sapzurro bay by the Colombia and Panama border line. 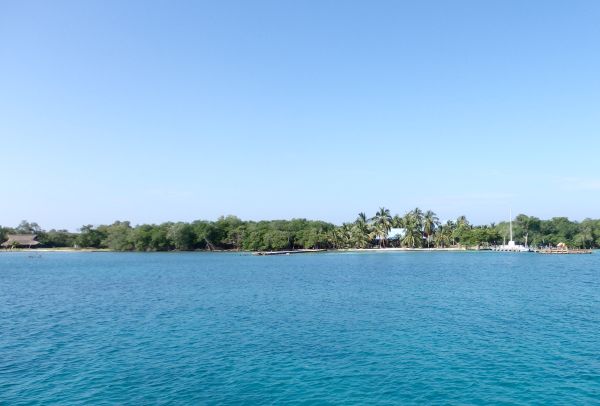 Tintipan Island Near Cartagena in Colombia

I was able to get the internet access in Tintipan through my tiGO simcard (Colombia). The first night at Tintipan anchorage, we were the only boat so I hardly slept. The next day, another boat arrived but they anchored far away from us but it was nice to see another boat nearby. Again, it was my paranoia, a side effect of the incident that happened to another boat in Taganga. Staying on the boat but not visiting a new island sounds not like us. Somehow, I felt safe staying on the boat. Days later in Sapzurro, we met the other boat anchored near us in Tintipan island. They told me that they didn’t feel safe either. However, the other two French sailboats told us that the local people voluntarily showed them the beautiful island. They said the local people were very nice.

*** Check below links to see more interesting stories and images of this island.

—Link to “The Most Crowded Island on Earth Isn’t Manhattan by Ken Jennings; a 74-time Jeopardy! champion.”
—Link to Wikipedia on “Santa Cruz del Islote”