My Experiences of Clothes, Food, Water, and Medical Bills in Rio Dulce, Guatemala (February to April 2016) 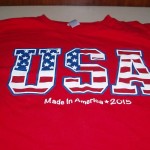 A 33 Cents T-Shirts Bought in Guatemala

Clothes are real cheap in Rio Dulce. Most of the stores sell second hand clothes that appeared to be brought from the USA. John has been enjoying buying work T-Shirts when there is a bargain. It costs 33 cents for a T-Shirt. Whenever he brought newly purchased T-Shirts, we laughed at the printings on the T-Shirts. I also purchased a nice summer dress with 30 Quetzals (US$4). We don’t know how all of these second hand clothes are brought here but they were like new and real cheap. I sometimes wondered if I would see my old clothes that I donated in the States. 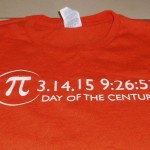 At first, food prices look cheap in Rio Dulce but looking closely, most of them are actually not, especially if compared with the quality. I am not a picky eater, as I am not afraid of trying different types of food. One morning, a guy we hired in Rio Dolce, brought his breakfast from the market and offered me some. I peeled the steamy banana leaves on that soft looking food and bit with my front teeth. Oops! Something was hard inside! There was a chicken bone there! 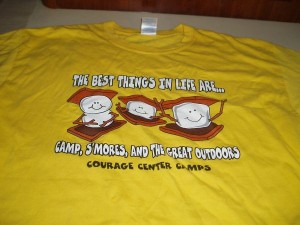 Courage T-Shirts from the USA.

One night, I was reading a book and at the same time, mindlessly snacking on some roasted peanuts. These peanuts were so good so that I bought a lot for snacks at sea. On one of the bites, I felt that I chewed dirt or something like a goat turd. I dropped my Kindle and ran to the sink, spit whatever it was out, and rinsed my mouth with water multiple times. I don’t know what it was, but it was not peanuts. 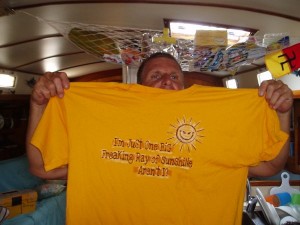 John loves this 33 Cents T-Shirts that he bought in Guatemala.

Whenever we had local workers, we asked them what they prefer to drink. All of them, responded to me “Agua Pura (Pure Water)” which means ‘Bottled Water’. John thinks I am a water snob. As a matter of fact, I am. The water we were getting here which was purified in the marina from the river, didn’t pass my standard while John had no problem drinking that water. I don’t like to generate the plastic bottle trash but I started buying bottled water again. The other day, when I poured the bottled water in my glass, I saw something slimy in the water in the glass. I rinsed my glass and poured the water again from the bottle. It was same. I saw more weird stuff in my glass again. I checked the bottled water, and realized the white slimy stuff was in the bottled water that I purchased from a grocery store. I checked the other bottles and found that all were them are the same. I dumped all of them instead of bringing those heavy bottles to the store and trying to explain it to a busy grocery manager in Spanish. John has always said that there is no standard for bottled water. Maybe I will even believe him after seeing this.

Health Screen Cost in Guatemala, Exchange Rate: 7.5Q to US$1.

Since we are in a marina, I decided to run/walk in the morning. It was nice to run on soil enjoying fresh air and listening to the birds. I felt pain in my abdomen on the left side after running. It first happened about 10 months ago when I ran with a friend in Bonaire. Since then, the pain came and went away. I spoke to a couple of doctors in Colombia but I was told that it was nothing to worry about. This time the pain was continuous, so I wanted to find out before going back to the States because it is too expensive to see a doctor in the US. I visited a local doctor in Rio Dulce in Guatemala and had various tests, and was referenced to see a gastroenterologist in another town, two hours away via two different buses. The gastroenterologist did an endoscopy and colonoscopy, and a biopsy in a local hospital in Puerto Barrios, Guatemala. I was told that I am not dying but I have bacteria and an ulcer in my stomach so now I am taking a tons of medications for two months that the Guatemalan doctor prescribed.

My mom used to tell me that I can digest even a rock. Looking back, I don’t remember when I ever had a food poison problem. In remote islands, when cooking a chicken, I asked myself if the chickens I bought were thawed and refrozen multiple times. Sailing life, living on a boat, is a real adventure. Sometimes, it is far off from the comforts, convenience, safety, quality of water and food, compared with the ones at home in the States. As I chose to live with this adventure, I continue opting for the boating lifestyle, visiting remote places in the world. This time with a little attitude adjustment; that is to look at my food and drink before taking it and enjoying each bite mindfully because eating is also a journey as sailing is, at least to me.

—My Medical Bills in Guatemala (March to April 2016)