Shiny Bottom of the Keel, Touching the Bottom When Passing the Rio Dulce River Entrance 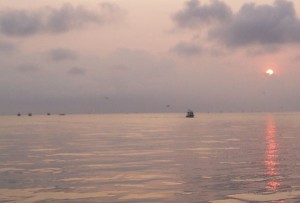 Fishing Boats Coming Back at Sunrise in Livingston, Guatemala

April 26, 2016: While waiting for a high tide to get out the Rio Dulce Entrance, a local boat stopped by and asked us if we needed his service to pass the shallow spot. We told him that we will follow our previous GPS track that we saved two months ago when we passed the shallow spot. We didn’t hit the bottom at that time.

Heading out the entrance and seeing the depth sounder reading 6’5”, I started to worry because we need a minimum of 6’5” depth to float. Slowly moving forward, I saw the depth sounder showing 6’3” and felt the boat slow down, maybe for about a long couple of minutes. This time, we hit the bottom but luckily, we were able to go forward without running hard aground. It must be just mud or soft silt. We actually followed our previous GPS track which was saved two months ago. At that time, we didn’t hit the bottom. The differences between now and two months ago were; (1) our water tanks and diesel tanks were almost empty two months ago, making the boat float lighter, (2) the high tide was 1.8 feet two months ago compared 1.3 feet this time, and (3) we waited until the scheduled high tide instead of leaving earlier than the scheduled high tide. There is not much room passing the shallow spot without hitting the bottom at the Rio Dulce River entrance. Lesson learned. After passing the shallow spot and arriving at a new anchorage, John snorkeled to see the bottom of the boat. He came up and told me that “The bottom of the keel looks very shiny and clean now. All the paint of the keel bottom is gone. It won’t hurt but barnacles will grow there quicker until we hull out the boat and paint it again.” 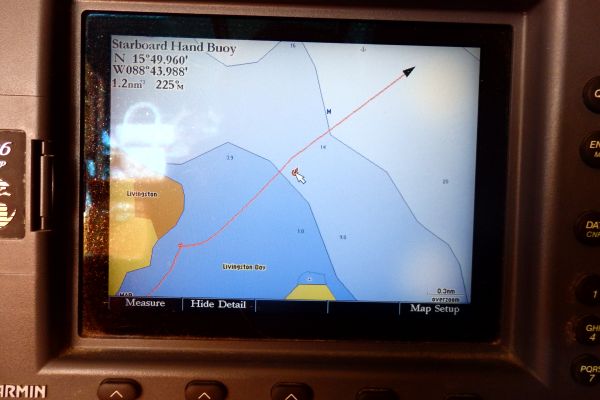