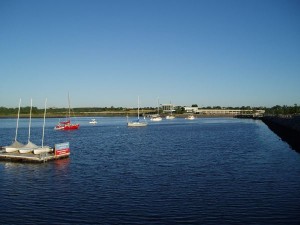 (August 12 to 31, 2016) During our sailing trip to New York City, we had originally planned to stay at the 79th Street Yacht Basin. (Dock Space: US$3.50/linear foot per day + US$20 Electricity per day) or drop an anchor (US$26/Day) next to the Mooring Field. Our boat was too large (47 foot) so we couldn’t use a reasonably priced mooring (US$30/Day) in 79th Street Yacht Basin. Based on the phone conversation with the marina, we are too heavy to use a mooring.

When our buddy boat mentioned an anchorage by Liberty State Park, John loved the idea that ‘it is free to anchor’ and even better it is close to Lower Manhattan, the other side of the Hudson River. Looking at the Google Map, this anchorage is in front of ‘Liberty National Golf Course’ and ‘Daily News’ buildings. 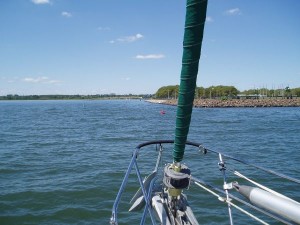 This anchorage can be accessed by passing a narrow channel by the west side of the Statue of Liberty from the New York Harbor. The anchoring area is actually smaller than it looks, as there are some shallow spots and a rocky area where it is too close to the seawall. To approach this place, we needed to come and leave during high tide. We draw 6.5 feet. The depth at low tide was around that. We dropped the anchor in this anchorage and stayed from August 12 to 31, 2016. When we first arrived, we found three unoccupied boats anchored (most likely long-term). During our stay, the most number of boats a night we saw, was nine boats including us. It was calm but the wind switched all different directions. Because of it, boat swung 360 degrees, and I think, nine was too many. We dragged many times when wind speed got beyond 12 knots. The bottom is soft mud, a bad smelly black silt kind (One local called it ‘Black Mayonnaise’.) We had to re-anchor five or six times during the 20 days of our stay. One day, while we were visiting the Ellis Island, our friend rescued our dragging boat. Whenever we brought up the anchor, it took forever to wash down the black smelly mud. We noticed most boats came to this anchorage and just stayed a night or a few hours to schedule with tide/current to go somewhere such as passing ‘Hell Gate’ or so. In all fairness our buddy boat never dragged. We use a 65 pound CQR as a primary anchor and the CQR isn’t great for this type of bottom. When we switched to the Fortress, we held great until the wind switched 180 degrees and the fortress tripped and tangled itself. If we had a Rocna or similar anchor we might not have had a problem. 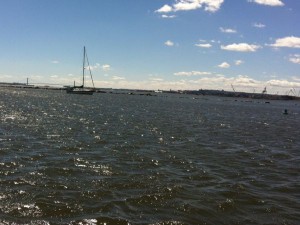 One day, while we were visiting the Ellis Island, our friend rescued our dragging boat. (They took a picture of our boat dragged getting close to the rocks.)

The adjacent ‘Liberty State Park’ offers a great view of the Manhattan Skyline. There are many walking and bike trails. This park used to be the New Jersey Central Railroad Terminal, decades ago. You can find rusty railroad tracks next to the anchorage, built out into the water where cargos were transported from ships to trains early in the 20th century. There is still unrepaired damage in the park from Hurricane Sandy in October 2012.

There is a public boat ramp near the anchorage but there was no dinghy dock. When we were there, a floating dock where we could tie our dinghy was yellow taped (off limits). We found the day before we left, it was repaired and the yellow tape was finally removed. However, by reading the park rules, I wasn’t sure if it is allowed to leave your dinghy at the floating dock or not. Our friends rowed their dinghy and carried it up the boat ramp, and left it on land. We managed to leave our hard/heavy dinghy by the seawall. 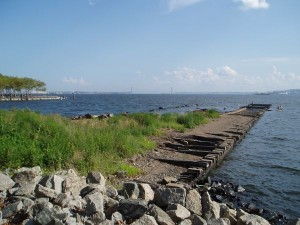 In the Liberty State Park, New Jersey, you can find rusty railroad tracks next to the anchorage, built out into the water where cargos were transported from ships to trains early in the 20th century.

To go anywhere from this anchorage, we walked about two miles distance to a public transportation (Ferry Pier or New Jersey Light Rail ‘Liberty State Park Station’). The Ferry pier (One Way Ferry: US$7) is next to the Liberty Landing Marina/Fuel. (Dock Fee: US$4/linear foot per day + US$18.80 Electricity per day for our 47’ boat-different electric rates apply based on the size of a boat). Even though I consider walking is good exercise, it was too much walking 30 minutes one way to take public transportation on a hot summer day. Finally, John decided to buy a folding bike so we rode to the PATH (US$2.75/one way, Port Authority Trans Hudson/NY-NJ Subway) ‘Grove Station’. There are two PATH routes from Grove Station: one goes to Mid-Manhattan (33rd street, near the Empire State Building) and the other to lower Manhattan (World Trade Center). During non-rush hour, we took our bikes in the train. A grocery shopping store ‘Shop Rite’ is near Grove Station. Another drawback to the Liberty State Park Anchorage is the poor cell phone connection for both voice and data. There were times we could not make a phone call or get onto the internet.

After staying in this anchorage for almost three weeks, we were exasperated from the constant dragging. By that time, we had seen enough of NYC. We decided to leave NYC for DC but we found a tropical storm ‘Hermine’ building near the west coast of Florida. We changed our plans and went to the Port Washington anchorage instead. So far, we like it here. It has much more room and the moorings are free for two days (US$25/day after). When there is a strong wind, we believe ‘Liberty State Park Anchorage’ is not the right place to be. Everything comes with a price. It didn’t cost anything for us to anchor at the Liberty State Park Anchorage. It wouldn’t be my first choice but I managed to enjoy New York City very much. It was nice though, gazing the bright light from ‘the Statue of Liberty’, days and nights from this anchorage.

Distant View of the Verrazano Bridge (the Gateway to New York Harbor from the Atlantic Ocean); Picture Taken from the Liberty State Park, New Jersey