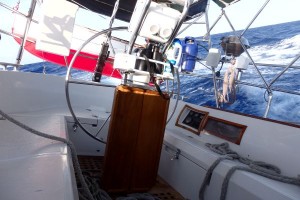 April 26 to May 3, 2016: I found that weather forecasts are about 50% accurate. Maybe it will rain, maybe it will not. Maybe it will be windy from the East, or maybe from somewhere else. Our sailing from Rio Dulce, Guatemala to Key West Florida started by motoring for three days, as the wind was directly in front of us, and we had a very limited area to sail in. This was definitely not what was forecasted. We stopped in different anchorages for first three nights to rest, the wind simply was not what we had expected. Motoring is not my preferred way to get anywhere as the engine noise and the diesel fumes stink. 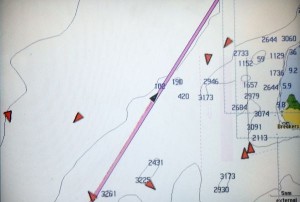 After leaving Belize, we got caught by a much stronger wind than was forecasted. We were beaten by the waves for many days. From South of Cozumel Island to pass the West Coast of Cuba (Cabo San Antonio), our speed over ground was between 8 to 11 knots. The wind was 28 knots apparent and we were on a tight beat to windward. The Gulf Stream was pushing us along, but the strong wind was producing large waves that routinely washed over the deck. One time, we got lots of water inside of the boat as if someone emptied a 5 gallon bucket down the companion way when a large wave washed over the deck and ran under the dodger and over the spray hood. Until now, we have never closed the companion entry while sailing unless it rains.

When our boat gets hit by a huge wave, it sounds like thunder. The beating/banging was nonstop. As days go by on an angry sea, we got used to the beating; still it was very tiresome. Night was pitch dark. I saw nothing but black sea, and you could not sit in the cockpit as spray was covering everything. A half-moon didn’t come out until 1 am. When it came out, it looked creepy. This strange weather sailing made me stay awake more than 24 hours. Many scary thoughts came in my mind in bed. I was thinking what I should grab if the boat splits in half or sinks. At first, I thought about my personal documents, computer, backup hard drive, and money. Thinking more, I realized it is most important to have food, water, clothes, whistle, safety device, and etc. I was going to make a ditch bag a while ago but I haven’t made one yet. It was mainly because I focused on a ditch bag with my lifelong personal belongings, boat documents and computer. Now, knowing what is important to have in a ditch bag, I plan to make one with energy food, water, clothes, whistle, mirror, first aid kid, safety devices, and etc. As it is defined, it is simple to make one before leaving for sea next time.

*** John’s comment here. Before we left, I told Kay that “We are going to take a beating on this trip, it’s not going to be like anything you have seen so far. When we sailed from Stuart to St. Martin, we were extremely lucky. All the sailing we have done up until now has been either downwind or on a reach. This is going to be a beat.” The boat is extremely tough, and very well equipped with a 6 man Givens life raft with food and water, an EPIRB, new rigging, new sails, etc. It is a Valiant 47 designed and built to sail around the world and maintained with an open checkbook. I had looked at the weather and was only concerned about avoiding a norther coming against the gulf stream around Cuba/Cozumel as boats have capsized or foundered in that area with wind against currents causing large seas. End John Comment. *** 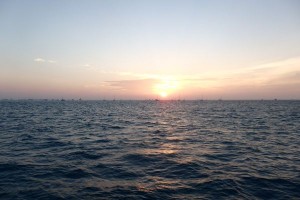 After 7 days at sea, we arrived at Key West safely. I learned about the excitement of heavy weather sailing, and I have to admit it was somewhat exciting. Experiencing the challenges that weather presented us, I feel stronger and know more about the sea. About two years ago, May 2014, if I had not made a decision on early retirement to join the sailing around the world trip, what would I have been doing instead? It is for sure that I would have had something less and other things more. It was my choice of all, taking risks, which made me rich in my lifelong journey. It’s good to be back to the USA where most of the people in the world wants to live, even though its health care system is unrealistically complicated and crazily expensive.