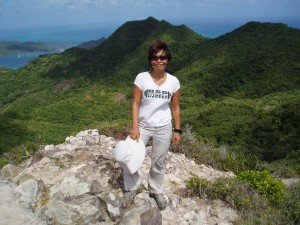 February 1, 2016: In order to see the island, we decided to rent a scooter for each of us (50,000 Colombian Pesos = US$16 Per Day/Per Scooter). I was a little worried because I haven’t driven a scooter before. It is the main transportation vehicle in Providencia. The road is good and empty so I was ready to learn a new skill, driving a scooter. However, the rental store didn’t let me rent one, a first time scooter driver. I was actually disappointed when we ended up renting a Kawasaki Mule, sort of a cross between a golf cart and an ATV (90,000 Colombian Pesos = US$28 Per Day) instead of scooters. 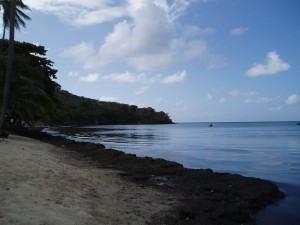 Driving the golf cart thing for one hour, we visited three out of four beaches on the island and covered about a half of the island. Recently, there has been a major phenomenon with seagrass/weed in the most of the Caribbean islands. Providencia is also suffering with it. Those beautiful beaches were covered with rotten seagrass/weed and smelled like rotted eggs. With so much time left on the rental vehicle, we decided to hike El Pico, the tallest peak on the island which is about 1,800 feet high (360 meters). 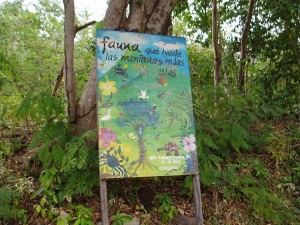 When we saw the first sign on the trail, we were relieved.

Finding the trail was not obvious. John and I already circled a small town twice to find the entrance of the trail. After talking to a local, we managed to find the trail and also met another hiker, Martin from Germany. Martin has been teaching Cello in a university in Santiago, Chile. He was one of the cellists in the Berlin Philharmonic Orchestra, and had an opportunity to try out teaching in a university in Chile for six months. Since then, he has been teaching Cello in Chile in Spanish for six years. He likes his job and lifestyle a lot so he plans to continue teaching. During school breaks, he travels South and Central America and also the Caribbean. This is the beginning of his month long trip to Colombia. He brought his ‘Lonely Planet Guide Book’ and I brought a note from my ‘Moon Travel Guide Book’. These two books originally didn’t help us following the trail though. When we couldn’t continue hiking, we had to come back to the starting point and started it over again. On the second try, we looked at the map a bit more and it worked even though we briefly lost the trail again. There was a local dog that kept following us. John shooed the dog away the first time. The second time, we let him follow us. It seemed the dog knew the trail. It would have been much better off if we had followed the dog instead of the guide books! 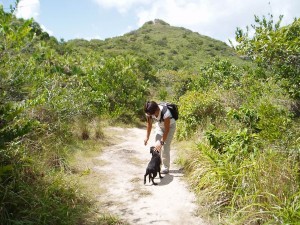 Dog was happy following us all the way to the peak.

Since hiking was not what we had planned today and it was supposed to be 2.5 hours of hiking (round trip) not 4 hours of getting lost and hiking, nobody brought snacks. We were hungry but we got lucky this time. We found quite a few golden ripe mangoes on the trail. Ever since we have been Providencia, John and I have been eating lots of mangoes that we picked on another trail. Martin was ecstatic about finding mangoes on the trail. Once we passed a point about half way up to the trail, we were so amazed about how pure and beautiful this island is. The trees, plants, and birds often made us stop and stare. There is a Colombian national flag on the top at the peak. Here, we peacefully looked around the whole 360 panoramic view of the island, and ate a couple of our new found mangoes!

Trail near the Peak

After hiking, we all three went to “Roland Roots bar” on Manchineel beach. This bar/restaurant has a real Jamaican flavor to it. The proprietor Roland has dreadlocks! We ordered grilled fish for lunch; however, it took more than 1.5 hours to be served. We kept asking the owner, Roland where our lunch is. ‘Coming soon…’ True island time!!! By the time, we were served, we were so hungry that it took only five or ten minutes to eat it all. Saying ‘Good-Bye’ to Martin, John and I drove around the rest of the island. Still too early to return the golf cart. Let’s drive the whole island again going the opposite way back. It only took 30 minutes driving to make a circuit of the whole island. After making two driving circumnavigations, we can say that we liked the island. The people are friendly, the scenery is great, the houses are colorful, and it is just a great place to spend some time. 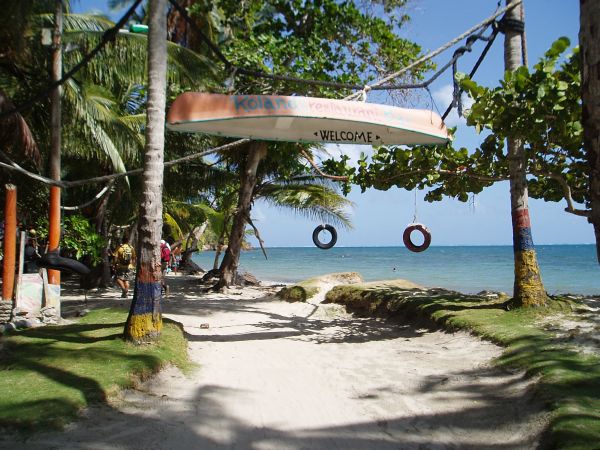 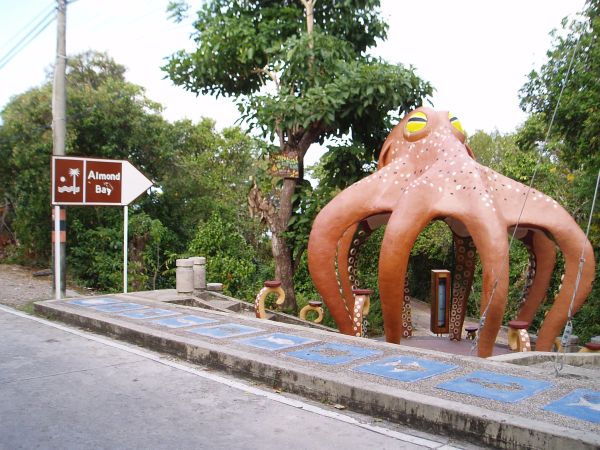 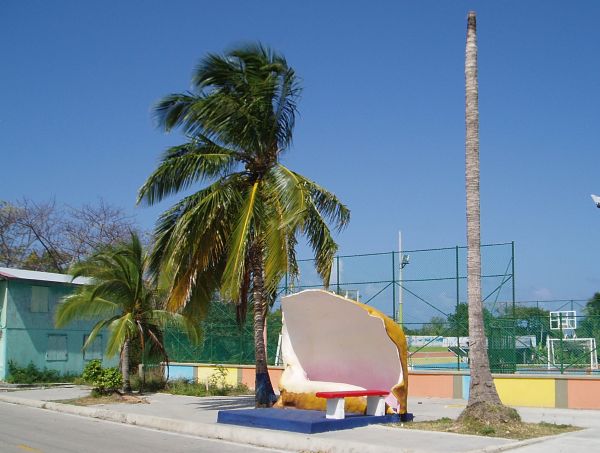 Obstacle on the Trail; we were uncomfortable passing by the bull so we waited… 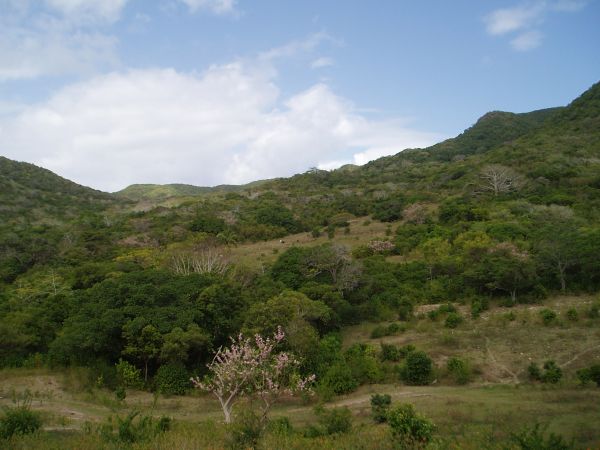 View from the Trail 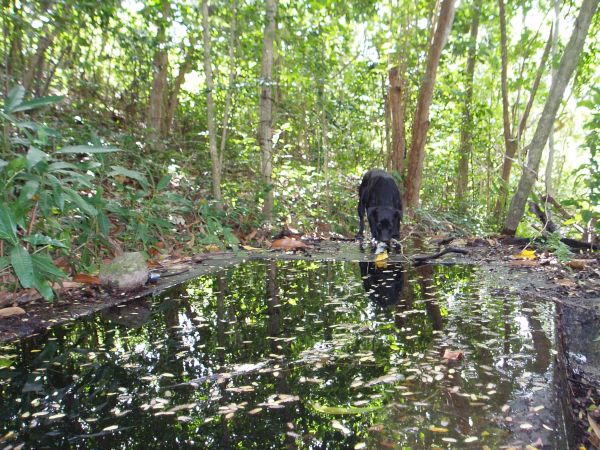